Nature vs. Nuture: The Raising of a Capitalist? 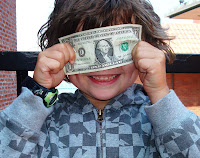 I was watching the Today Show this morning and there was a
story was about a Dad and his 4 year old son.
They were in the studio on set at 30 Rockefeller and dressed alike in matching Tiger Woods logo emblazoned golf sportswear. Matching vests, golf shirts, hats, clubs – the whole Par 5.

Apparently the kid had been playing Wii Golf with his Dad since before he could crawl and now, at the ripe old age of 4 he has already whacked in his first hole-in-one. Even more impressive, the Dad got most of their game on home video, the shot and then the discovery of this kid finding his ball in the hole on a Par 3!

Now, I’m a little skeptical; this whole story just seemed a little too perfect for me, however I started to really pay attention to the Dad and his son. The son is clueless but this father is absolutely beaming with pride and I realize this probably isn’t a hoax. Actually it’s every Dad’s dream and in reality he is seeing his whole future materialize from this one single (albeit impressive) event.

- Son is born, and Dad is there in hospital room with kid sized golf club in hand and a sleeve of balls for the ‘welcome to the world’ present

- Dad immerses the kid into ‘all things golf’

I mean, if you think about it. It’s no different than the back story for Tiger Woods himself or Serena and Venus for that matter.

This Dad is doing what all good Dad’s should be doing, helping their children pursue their dreams – but then who’s dreams are they? I mean did this 4 year old wunderkind really come out of the womb destined to be a pro golfer or is this merely a 30-something father realizing that HE isn’t going to be the sports superstar he thinks he should have been but maybe if he tries hard enough now his son will?
________________________________________________________
Me? I don’t really identify with this sort of sports dream. I’ve never (ever) been described as the ‘athletic type’. Actually I’ve never ever been described even marginally as a ‘sports fan’. My idea of a workout is lifting the cushions off the living room couch in search of the remote and only putting them back AFTER I’ve rested some (or until at least the second commercial break.)

So there I am watching the Today show and I start to freak out a little bit – what have I been doing to my own kids (intentionally or not) to help (or hinder) their future successes?

I have always felt that it is the parents’ job to nurture their offspring’s passion or natural talents. I don’t believe in entitlement and I don’t believe in success without hard work. And just because I love what I do for a living that absolutely doesn’t mean that I think for a moment my kids should follow in my footsteps. Actually the inverse is more likely in that I will go out of my way to make sure they find their own path and not follow mine.

The vignette ends and I head to TanYard Parish to set up for this weekend’s Parade of Homes and as I am instinctively going through my routine, unit by unit, checking to make sure the correct lights are on, air conditioning is set, bottled water chilling, business cards ready – I’m thinking about the Today Show again and I start to realize, what has been going on right under my nose…My just-turned-six-year-old Lane is becoming a potential ‘Captain of Industry’ and with that I get a little excited.

I mean the signs have always been there, at least since he was 4. It started off with him innocently enough telling me about George Washington. The conversation went something like this:

“Did you know that George Washington was the first President of the whole wide world?”

“Did you know he had white hair?”

“Did you know that he is on Quarters AND on Dollars?”

See that? Quarters AND Dollars. For the typical parent this is just an average ordinary day in the life of a pre-schooler and their typical average ordinary conversations. Even I didn’t think much of it but the clues were right in front of me.

Later that same year, the fixation grew. The questions began to get even deeper:

Or my personal favorite, “How do dogs get money?”

And then, even more personal,

“How much did I cost? Like, how much did you and mom have to pay to get me?” (Fortunately this didn’t lead into a birds and bees discussion; hopefully I have a few more years)

And then, the really heavy stuff,

“How much money do you and Mom have? Where do you keep it… how do you get it… who gives it to you?”

By age 5 the questions got even more obvious and I was still missing the signs:

But, in early 2008 it was painfully obvious that the ‘downturn’ was a bit more ‘down’ than usual so we started to nickname our new lifestyle as the ‘Church Street Recession’. You know, because it sounded funny and we thought that if we said it then it was like a reverse jinx and therefore it would never happen.

(Instead it is now painfully clear that the reverse jinx didn’t work and unfortunately for the entire World, because of this it was an actual jinx and it looks like we pretty much created the whole recession, for that the Spetrino’s deeply apologize)

But even better, this was the perfect answer to about 99% of requests received from the kids. You know, Nick (7 at the time) would say, “Hey, can we get a trampoline?” or “I need an i-Phone really bad, everyone in the first grade has one” and while neither would ever be an option regardless of the economy it was just an easier reply to say, “No, we can’t, not with the Church Street Recession and all”

So by the Summer of 2008 the word recession had become a pretty routine household word. Finally, the boys and I are driving around, checking jobsites one Saturday and Nick was getting a little tired of the whole “C.S.R.” response. I mean he didn’t have anything to do with the economy but this recession thing was really starting to cramp HIS lifestyle. So Nick asks:

“Dad, what exactly is a recession?”

Hmmm, good one I think to myself.

And with that, Nick said:

But about 3 or 4 minutes pass and Lane pipes up from the back seat with:

“Well, where did all the money go? What happened to it?”

Hmmm, another good one and with that I immediately shot back:

Certainly this must be a purely genetic predisposition or something. It’s not like he was born and I handed him a 10 key calculator and a blackberry....we didn’t dress him up like Alex P. Keaton and take head shots to include in the bio of his kindergarten annual report.

The kid is fascinated with money – and not in a materialistic way. There are absolutely no signs of greed. It’s more of a philosophical understanding of money and its basis for how our world operates. It’s not like he is trying to get money just to buy things. (especially not since he found out they GIVE dogs away free at the pound!)

If anything, he likes to use his money to do things for other people- which is kind of sweet – like buying ice cream for his friend Andrew who was getting his tonsils out.

And he’s even looking out for his big brother (that is until Nick actually told him how much an i-phone would cost including the service contract and once Lane did a cost benefit analysis based on the number of friends Nick has, including relatives, he explained that he should just borrow someone else’s cell phone until they come down in price or until the Chinese come out with a knock off.)

Seriously though, he just has a genuine interest in understanding the many positives that can be derived from working hard in order to obtain money in hopes of advancing ones goals and objectives – or security for that matter. And as his Dad, I can really relate.

I want him to be his own kid, grow at his own pace, make his own mistakes but I am certainly willing to do my part by explaining some simple rules to live by that I picked up along the way like, my adolescent favorite, “Sacrifice now for future gains later.”

And after buying a car with power windows and cruise control, “A luxury once sampled becomes a necessity.”

Or something slightly more on his current level like, “A penny saved is a penny earned” – a timeless quote from another old guy who also had white hair (who may or may not have had wooden teeth) but just so happens to be on the one hundred dollar bill…

Don’t worry, our publicist already has a call into the folks at CNBC and my wife is looking for matching red ‘power neck ties’ online.
Posted by Dave Spetrino, Jr. at 7:13 AM

I'm enjoying your posts - you have a gift for storytelling! It's so exciting to see kids become who they're going to be!

Enjoyed the news...keep it up!