Idle Hands are the Devil’s Tools

We have this really cool neighborhood project Downtown called “Indie Ice” and it encompasses the entire city block face. It’s partially complete, sitting idle and making me crazy…
First, a quick history lesson about redevelopment Downtown:
City blocks are 330’ long. That was determined by the ‘Gunter’s Chain’ and this form of measurement was how most English Settlements were surveyed in the 18th and 19th centuries. Most lots Downtown that faced a numbered street were 165’ deep and either 33’, 66’ or 99’ wide. Cross streets contained more shallow depths; it wasn’t uncommon to see home sites as small as 33’ x 66’.

This was the development pattern for Downtown Wilmington for more than 200 years. It allowed for a consistent layout for the city’s streets and land. It also provided for density while allowing pedestrians to easily walk to wherever they needed to go.

Unfortunately, sometime in the 1950’s or 60’s in Wilmington as “urban flight” began and residents starting moving out to the suburbs, a zoning ordinance was put in the books that said new, subdivided lots had to be a least 35’ wide. (That wasn’t very helpful if you live and build Downtown.)

What that meant for our big City Block was that with 330’ of frontage, if we wanted to subdivide the street for homes, under the 1950’s ordinance we could only get 9 home sites on the street – even though the lots across the street had 10!

This was a problem, not just for my own need of balance and symmetry – but the finished street just wouldn’t look right. The homes would be further apart and now we would have to average the cost of the land, development and construction costs over nine homes instead of ten. It’s a lot of money and land to waste because some planner in the ‘50’s could do math by 5’s easier than 3’s.

Gratefully our current City Planners understood the dilemma and worked with us to change the decade’s old ordinance to allow land in the Downtown area to be 33’ wide – as it had been for centuries before.
Once the new regulation was put into effect, we promptly subdivided our site into 10 lots and began our new neighborhood and our city block streetscape.


The Indie Ice site is along the old rail bed at N 6th Street and Brunswick. Just a few steps from the many projects we built along N 4th Street in the Brooklyn Arts District.

The newspaper articles at the time heralded the site as having the ‘finest artesian wells in all of Wilmington’ where water was being pumped to the surface and frozen for use by not just the citizens of Wilmington but communities in the region, especially those serviced by the railroad.

I have old advertising and artifacts from the site, even some hand drills and ice tongs. Most of the old buildings and annexes are gone but the main storage and cooling building is still there. It sits along the railbed, tucked into the overgrown kudzu away from the main street. Even at 4 stories tall, it’s easy to overlook. (see pic)

I get asked everyday what we are going to do with the old brick structure with its 3’ thick walls and no windows, and I always answer the same way:

I know that I won’t tear it down and I know that it won’t be a bunch of condos. The only thing the building was ever good for was making and storing ice – not much of an industry these days.

Hopefully some creative-arts type will come up with a plan and if it’s a great idea and helps the neighborhood, it can be their opus as I will gladly deed it to them.

Fortunately, the old building didn’t interfere with our plans for the site. Our redevelopment goals for the land were modest but important to the continual improvements we have tried to apply to the Northside of Downtown.

The master site plan included ten single family homes that front along the brick paved street and include a rear alley for parking and municipal services (like utilities and trash).
You know, just like the old days in a Downtown neighborhood.

We used a template of three different floor plans (3 and 4 bedroom) on these two story homes and then a set of facades and color choices that provided continuity and character without the ‘tract house’ look. The homes fit in well with the older housing stock in the area and enjoy a prudent early 20th century charm about them.

Six of the ten homes were completed and were quickly rented to a diverse range of young people who now call Downtown ‘home’. Ultimately the homes will be sold and a once blighted part of town will come alive once again.

It was the first time we had a full city block to work with, for a company like ours, that was pretty cool.

This has been an exciting project for me as well and I want to see it finished. It’s one of my long term goals and I want it successfully completed and marked off my “to do list”.

Due to the recent changes in bank policies and the finance industry in general, we currently sit idle. Our funding for the last four homes was cancelled and, like many others in our industry, our options for new capital are limited.

And I know it isn’t stalled indefinitely but for a guy like me it’s like reading an amazing book and then misplacing it before getting to the last chapter. Seeing the project only partially complete wreaks havoc on my intense desire to see how one story ends and another begins (with a new history and new cast of characters.) 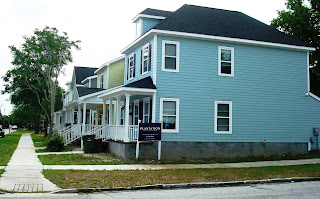